One of my earliest exposures to superheroes was Sam Raimi’s Spider-man. I remember going to the theater with a friend of mine and being completely swept away by Peter Parker’s discovery of his powers, and clashes with the villainous Green Goblin. Over the course of the film, Peter also moons over the “girl next store” Mary Jane Watson. And while I have no issues with Kristin Dunst’s performance in this role, there was nevertheless something unsatisfying about their relationship.

This version of Mary Jane falls into what I’ve come to see as The Love Interest Trap, which has plagued many a superhero franchise, especially when it comes to film. The problem with female characters who are specifically cast to play love interests to male superheroes is that they themselves don’t matter. Sure, they can be anything from determined lawyers to struggling actresses, but the actions they take rarely goes beyond that of the love interest. What matters the most is the conflict her presence creates within the male superhero. This is something perfectly illustrated by the end of the film, where (in a harrowing scene) Spiderman is forced to choose between saving the woman he loves, and a tram car filled with innocent children. While Peter manages to do both, the incident proves to him that he can never be both Spiderman and in a relationship with Mary Jane, as doing so puts her in danger.

It’s impossible for me not to be frustrated by roles like this, both as a woman who prefers to see female characters play more active roles in superhero stories, but also as a fan of superhero love stories. This has got me thinking. How do we circumvent The Love Interest Trap and create more positive roles for women involved in superhero romances? One quick solution is cutting down on “damsel in distress” scenes, where the male superhero swoops in and saves the female love interest when her life is in danger. And sure, I don’t need to see Superman rescue Lois Lane three times over the course of one two-hour blockbuster (seriously Clark, once is swoon-worthy, any more is repetitive), but by over focusing on scenes like this, you don’t get to the root of the problem, a power imbalance.

In traditional superhero narratives, the power basically goes the person who can take out the bad guy. So, when you have a relationship between a superhero and a non-empowered person, the power immediately goes to the superhero. Therefore, you can have a love interest that looks super impressive on paper, but ultimately fall flat. If the story doesn’t value what they bring to the table, then it doesn’t really matter if they’re a kickass reporter or the CEO of a global company. At the end of the day, they still don’t matter.

Sticking with film, one way some of the more recent Marvel movies have dealt with this issue is by doing away with romantic storylines, and just telling stories with female characters. This is something that works well in films like the first Avengers, Captain America: Winter Soldier, Thor Ragnarök, and Captain Marvel, where romantic relationships are either majorly downplayed or don’t exist.

I can see why these films chose this path. Not every story needs a romance. Unfortunately, by completely rejecting romance, you’re also cutting yourself off from interesting storylines. Personally, I love the humanizing power of relationships-romantic or otherwise-in superhero narratives, and how that vulnerability can reveal a different side to the superhero, creating an altogether more dynamic character. It’s one of the reasons why I chose to write superhero fiction in the first place (the others being awesome superpowers and fight scenes).

Another way to sidestep The Love Interest Trap is by making all parties involved “super” in some way. And some of the most memorable relationships in comics do this very well. Just look at Batman and Catwoman or Gambit and Rogue. If all parties wield the power so strongly valued by the narrative, then there’s less likely to be an imbalance. This is something I try to do with my Red and Black series.

At the beginning of the first book, the heroine, Dawn, is a budding superhero, while the love interest, Faultline, is a vital henchman for a supervillain. Putting them on opposite sides of a conflict, while their secret identities are meeting and falling for each other is one of my favorite types of superhero storylines, and I really enjoyed getting to write it.

But this solution also doesn’t get to the root of the problem, the power imbalance that comes from narratives that value, above all else, the ability to take down another guy in a fight. As long as we solely focus on stories that place this one ability on a pedestal, any other character that does not fulfill that role will instantly be devalued. From a storytelling standpoint, this is another example of cutting yourself off from potentially interesting plot lines that allow other types of characters to shine.

I love superhero stories. Whether they be in film, comics, television, or novels. I love more traditional storylines (including the Spiderman film I have picked apart in this guest blog), and ones that look at the genre in new and interesting ways. But if there’s one thing I’d like to do away with completely, it’s The Love Interest Trap, which so often devalues potentially interesting female characters to the point where they don’t matter. Instead, of writing love interests lets write complex female characters with wants, needs, and flaws that contribute to the narrative. And yes, let’s have them fall in love.

If you’d like to read/watch a few titles that I think do this very well, then I’d advise you to check out the following.

In addition, I hope you’ll consider checking out my own books, the Red and Black series. The latest book, Black and Blue is now available both in ebook and in print.

Hey, guys! I hope you enjoyed this guest post by Nancy O’Toole Merservier (let’s not kid ourselves, of course you did). It’s such a pleasure to have her visit! 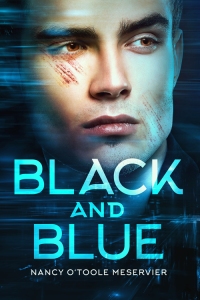 Nancy is a librarian by day, author of superheroic urban fantasy by night. She has a super-sweet blog that boasts many discussions about superheroes, novels, and writing in general, so I suggest you check it out!

Photo by Raj Eiamworakul on Unsplash