What happens when a writer gets ahold of peculiar pictures with stories practically crammed inside? One very odd yet wonderful story!

Let’s dig deeper to see how this story works. 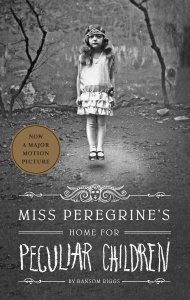 A mysterious island. An abandoned orphanage. A strange collection of very curious photographs. It all waits to be discovered in Miss Peregrine’s Home for Peculiar Children, an unforgettable novel that mixes fiction and photography in a thrilling reading experience. As our story opens, a horrific family tragedy sets sixteen-year-old Jacob journeying to a remote island off the coast of Wales, where he discovers the crumbling ruins of Miss Peregrine’s Home for Peculiar Children. As Jacob explores its abandoned bedrooms and hallways, it becomes clear that the children were more than just peculiar. They may have been dangerous. They may have been quarantined on a deserted island for good reason. And somehow-impossible though it seems-they may still be alive. A spine-tingling fantasy illustrated with haunting vintage photography, Miss Peregrine’s Home for Peculiar Children will delight adults, teens, and anyone who relishes an adventure in the shadows.

*this summary was taken from Goodreads

Ever since seeing the cover of Ransom Rigg’s Miss Peregrine’s Home for Peculiar Children on the shelf of Barnes and Noble, I’ve been both intrigued and put off by the creepy aesthetic. We’re taught not to judge a book by its cover, but eventually, my curiosity won out over my trepidation (I don’t read much horror, for fear of being unable to sleep at night) and when I saw it on sale, I scooped it up.

It’s fitting that I would be impacted by outward appearances with a book that focuses on the strange world that lies just beneath our own. The cover of my copy is a black-and-white picture of an unsmiling little girl wearing a crown…and levitating slightly off the ground. This one little wrong detail on the cover art (the levitation) is barely noticeable, which speaks volumes to the writing style within its pages. Upon first seeing this image, even our main character Jacob almost misses this detail until his grandfather points it out.

He slipped me another photo. Once I’d had a moment to look at it, he said, “So? What do you see?”

He tapped the bottom of the picture. “What about her feet?”

I held the snapshot closer. The girl’s feet weren’t touching the ground. But she wasn’t jumping—she seemed to be floating in the air. My jaw fell open. “She’s flying! (Riggs 15)

The scene is accompanied by the picture from the cover, of the little girl levitating off the ground. Jacob’s young mind struggles to comprehend this detail, but he’s quick to believe in the fantastic elements of his grandfather’s stories. “Is it real?” Jacob asks, to which his grandfather replies, “Of course it is” (Riggs 15). There’s a magical element in this imagery that’s present both in the image of the little girl included with the text, and the text itself describing Jacob’s wonder.

Riggs uses the photos in Miss Peregrine to create an unsettling atmosphere at the same time as a magical and fun tone. When the invisible boy, Millard, is introduced by his photo, the image of a bunch of empty clothes just standing there, without a head, would be enough to perturb any child.

The first was a blurry picture of what looked like a suit of clothes with no person in them. Either that or the person didn’t have a head. (Riggs 14)

But then Jacob’s grandfather turns the tone around, a complete 180, describing instead Millard’s personality and not just his peculiarity:

“Sure, he’s got a head!” my grandfather said, grinning. “Only you can’t see it..Millard, his name was. Funny kid. Sometimes he’d say, ‘Hey Abe, I know what you did today,’ and he’d tell you where you’d been, what you had to eat, if you picked your nose when you thought nobody was looking. Sometimes he’d follow you, quiet as a mouse, with no clothes on so you couldn’t see him—just watching!…Of all the things, eh?” (Riggs 14-15)

The wonder of the photos and grandfather’s memories shine as he relays them, taking some of the gloomy away from Millard’s accompanying picture. The image that Jacob’s grandfather paints of him through dialogue, highlighting his personality instead of his oddities, provides a stark contrast to an otherwise disturbing first impression. In this way, grandfather’s awe-inspiring stories are more magical than scary…at least, so far.

The contrast between the photo images and the imagery of the prose seems to contradict each other, and yet they complement each other nicely. What we’re left with as readers is the unique sensation of being a little scared and very much intrigued. In this case, judging a book by its cover was a reasonable thing to do; at least, in some sense. There is also the interesting notion of outward appearances failing to represent the whole story, as the book continues to illustrate.

It can seem counterintuitive to pair creepiness with wonder, but Riggs does so with an effective amount of mystery (the empty clothes) and humor (Millard’s silly shenanigans). Similarly, Riggs provides a balanced portion of descriptive imagery in the prose and Jacob’s reactions, to letting the photo images speak for themselves. Needless to say, reading the story is quite the peculiar experience.

If you feel particularly interested or inspired by the photos in Miss Peregrine’s Home for Peculiar Children, I encourage you to read the book too! It’s an adventure I won’t soon forget.