Are you having trouble writing dialogue between two or more characters? Want to know what makes dialogue interesting to read and how to craft character speech while moving the story forward?

What better way to learn than by looking at a wonderfully entertaining example? 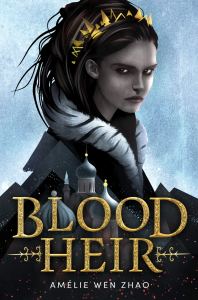 In the Cyrilian Empire, Affinites are reviled. Their varied gifts to control the world around them are unnatural—dangerous. And Anastacya Mikhailov, the crown princess, has a terrifying secret. Her deadly Affinity to blood is her curse and the reason she has lived her life hidden behind palace walls.

When Ana’s father, the emperor, is murdered, her world is shattered. Framed as his killer, Ana must flee the palace to save her life. And to clear her name, she must find her father’s murderer on her own. But the Cyrilia beyond the palace walls is far different from the one she thought she knew. Corruption rules the land, and a greater conspiracy is at work—one that threatens the very balance of her world. And there is only one person corrupt enough to help Ana get to its core: Ramson Quicktongue.

A cunning crime lord of the Cyrilian underworld, Ramson has sinister plans—though he might have met his match in Ana. Because in this story, the princess might be the most dangerous player of all.

* this summary was taken from Goodreads

When I first picked up Blood Heir by Amalie Wen Zhao, I was very ready for the bloody, dangerous adventure into the Cyrilian Empire, a world of Affinities and magic. And yes, this book was everything I wanted and more.

If there was one particular aspect of the storytelling I wanted to highlight for analysis, it would be the relationships between characters. Specifically, through dialogue. Specifically, between Ana and Ramson.

One of the shining examples of good dialogue writing in this story comes at the very beginning. Ana, our protagonist, ventures to a prison where she might find Ramson Quicktongue, crime lord extraordinaire, in the hopes that he’ll help her clear her name as her father’s killer and root out the corruption in her kingdom.

Ramson, however, has plans of his own and a personality that clashes beautifully with Ana’s. We see this as early as page 6, when Ana cautiously approaches him for the first time. Even though she is on the outside of the prison cell, her speech patterns and dialogue tags suggest that commanding other people is new to her, and Ramson, who is used to being in charge, picks up on this right away.

“Quicktongue,” she said, testing her voice, and then louder—”Ramson Quicktongue. Is that your real name?” A corner of the prisoner’s mouth cured in a grin. “Depends on how you define ‘real.’ What’s real and what’s not tends to get twisted in places like these.” His voice was smooth, and he had the faint lilt of a crisp, high-class Cyrilian accent. “What’s your name, darling?” (Zhao 6).

Here, Ana makes s first impression on Ramson by accidentally showing her naivety when it comes to the world of crime. She starts off quiet and then tests her voice, as though she isn’t sure at what volume she should be speaking in order to be intimidating. This is an interesting aspect of her personality; even though we later discover that she does possess a certain amount of power, she is not used to using it for her own gain. In her attempt to not give herself away, she doesn’t say much, instead, she lets the absence of words, what she isn’t saying, speak volumes.

In contrast, Ramson replies with a bit of a riddle, throwing out wordy dialogue in a voice that is “smooth” and deflects her question with one of his own that puts her on the defense by asking, in a demanding way as we see with the italics in “your,” what her name is. But perhaps the most telling difference in Ana and Ramson’s personalities comes in the form of “darling,” a little extra spice to Ramson’s dialogue that clearly shows how at ease he is with a situation in which he seems to be at a disadvantage. This little jeer throws Ana off-balance and likewise off-balances the reader, who might both be annoyed with his seemingly condescending word choice and charmed by it at the same time.

What follows is a quick back-and-forth dialogue between Ana and Ramson.

“My name is none of your concern. How fast can you find someone within the Empire?” The prisoner laughed. “How much can you pay me?” “Answer the question.” … “Depends on who you’re looking for…Hypothetically, of course. There are limits to even what I can do from inside a cell” (Zhao 7).

While Ana’s dialogue becomes even more clipped and demanding, Ramson becomes freer with his emphasis on certain words as shown by the growing number of italics. The emphasis through italics takes on a condescending feel similar to the tone of “darling” that he uses the page before, almost as if he’s talking to a child.

But Ana takes this opportunity to step up her game, so to speak.

Already it felt from their conversation as though she were walking a tightrope, and a single misplaced word could send her plunging… “I don’t need you to do anything. I just need a name and a location” (Zhao 7).

In response to Ramson’s control of the conversation, Ana gives in and adds more words to her previously clipped dialogue. She steals Ramson’s trick and places emphasis on “you,” in an attempt to bring the conversation back under her control.

Ramson’s response brings the dialogue tug-of-war to new levels. “You drive a hard trade, my love” (Zhao 7), he says. Going from “darling” to “my love” in an attempt to disconcert Ana even further is an obvious tactic, as shown from the description between his dialogue, from which we can read between the lines:

From Ana’s narrowed eyes, we can tell that she’s onto him.

From the sleazy way he spoke and the glint of glee in his eyes, it was clear he found amusement in her desperation…

They both know they are playing games with each other, yet neither is willing to relinquish control.

This opening scene of Blood Heir perfectly illustrates the changing power between characters through dialogue, a common literary tool for writers. Keeping an ever-changing balance between two or more characters not only keeps the scene interesting; it imbues each character with their own sense of agency and hints at their individual motivations in a subtle way no other literary tool does.

There is much more to this particular scene’s dialogue battle, but the experience of reading it for yourself for the first time is just too good for me to spoil it here. Suffice it to say that Blood Heir grabs a reader’s attention right off the bat by utilizing dialogue in a fun, efficient, and elegant way.
If you haven’t yet read Blood Heir, um, why not? I am absolutely happy that I gave this story a whirl because the engaging dialogue one of many highlights of the book. If you’re interested, check it out!

Photo by Brett Jordan on Unsplash